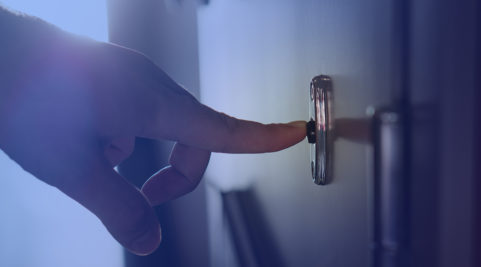 Maybe your house is too loud for you to hear the front door bell. Maybe it's too big. Maybe you wanted a fun way to get acquainted with TeleSign's SMS API. Any which way, we've got you covered with today's project, an SMS doorbell. Rig a Raspberry Pi so that whenever someone presses a button, you get a text message telling you they're at the front door. Not sure what a Raspberry Pi is? Don't worry, we've included a 101 section for beginners.

A Raspberry Pi is a small computer that's cheap and plugs into a computer monitor or TV. Though if you do plan to use the TV screen you should make sure it's not movie night at your place. Not everyone will find code compilation as riveting as you do. This small computer lets you easily explore computing and programming in languages like Python. You can also do basic things like surf the web, write text files, and other basics.

If you already have your own Raspberry Pi, you probably won't need to configure it. If you bought one just for this project, we do recommend the starter kit listed since it comes with everything you'd want to get started and maybe even a little extra. The kit includes cables, a power source, and a WiFi adapter that makes your Pi more portable. You can always plug the Pi directly into your router for internet access, but lots of people keep their routers tucked away and you may not want to sit in the closet with a bunch of shoes just to work on this project. We'll leave it up to you.

Your kit should include instructions for configuring the Pi, but if you find those lacking, here is a great online tutorial that helps you get your Pi ready for this project: http://dailylinuxuser.com/2015/03/setting-up-raspberry-pi-2.html

‍You will also want to be able to use pip. If your Raspberry Pi does not have it installed by default, you can use the command:sudo apt-get install python-pipat the command line to get the Python 2 version of pip installed. There's more details about what's available here: https://www.raspberrypi.com/documentation/computers/os.html

‍When you are done, you will be able to:

The code for this project is fairly simple. You may need to download some of the libraries listed. rpi-gpio, HTTPBasicAuth, and requests are three you may need to add.To add these libraries, open a terminal window and at the command line use:

If you were playing around with your Pi and plugged in any kind of circuits, it's recommended that you remove all of those, particularly while installing the modules we mentioned. Sometimes power can bleed out into your circuit in unexpected ways and cook parts of your Pi.After you install the modules, open a text file and paste in this code, which is a slight modification on the code sample here - http://razzpisampler.oreilly.com/ch07.html:import RPi.GPIO as GPIO

Save your code file as sms_doorbell.py.

Set Up the Circuit

Now we set up the circuit on the breadboard.

1. Take the push button, and position it over the big groove down the middle of your breadboard. Arrange it so that two prongs go in on one side of the groove, and two go in on the other side.

2. Take your jumper cables and push the male ends into the board so that one jumper cable is aligned in the same row as one prong from the push button. You only want to do this on one side of the groove. The end result looks like this:

Here is a diagram labeling the pins and showing the two pins circled:
‍

Now all you need to do is run the code. Open the terminal window and run your program with the command:python sms_doorbell.pyIf you saved your file somewhere else, navigate to the directory you have it in, and then run it.After the code is running, press the button on the breadboard. You should get a note on the terminal window that says ‘Button Pressed' and a text message telling you someone is at the door!

Your SMS doorbell prototype is complete! We will leave it up to you to decide if you want to set it up on your front porch."